ABOUT THE SOLSTICE PROJECT

The Solstice Project is an interdisciplinary team of archaeologists, archaeoastronomers, geodesists, and remote sensing experts that studies the rich heritage of the ancient Chaco culture in the American Southwest. It was founded in 1978 by Anna Sofaer, following her rediscovery of the Sun Dagger site on Fajada Butte in Chaco Canyon, New Mexico.  Our non-profit organization continues to research, publish, and present our findings on the  achievements of the Chaco people; how they envisioned an order of cosmology through monumental buildings, non-utilitarian roads, and rigorous geometries, in a vast expanse of a remote and inhospitable desert. Our two films, The Sun Dagger and The Mystery of Chaco Canyon (frequently aired on PBS) document how the Chaco culture developed a complex astronomy and aligned their ceremonial architecture with the cycles of the sun and moon.

We have created a 3-D interactive model of the stunning Sun Dagger site, demonstrating in real time how three rock slabs cast light patterns that mark the solar and lunar cycles on spiral rock carvings. The model shows what the eye cannot readily see:  how the Chaco people intricately united these phenomena at one site.

We are now working on a third film, Written on the Landscape: Mysteries Beyond Chaco Canyon, to illustrate our new ground-breaking research that shows the immense region of the Chaco world, using aerial imagery, precise surveying techniques and LiDAR (aerial laser scanning). Insights come from Puebloan advisers combined with our new understanding of Mesoamerican parallels, for cardinal directions, the interplay of vertical and horizontal axes, ritual ‘roads’, cacao, shells, spirals and the sun and moon. The film will also serve as a clarion call to protect this ancient resource from degradations of the landscape through energy extraction and disregard for the environment. 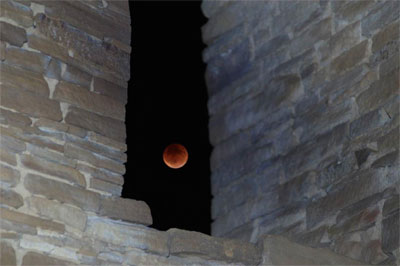