By Anna Sofaer and Contributors to the Solstice Project “CHACO ASTRONOMY is a work of seminal scholarship that is enthusiastically recommended for personal, professional, and academic library (collections in) American Archaeology, Native American History, and Paleo Astronomy reference collections and supplemental reading lists.”—Midwest Book Review 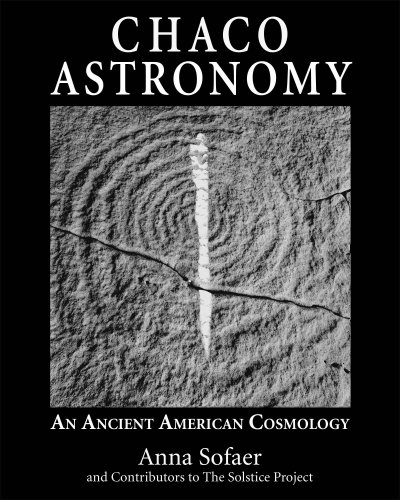 “These pioneering essays…shape a startling new conception of Chaco Canyon as a pilgrimage center, sparsely inhabited, its buildings largely symbolic, locked with Mesoamerica into one grand cosmological order.”— Vincent Scully, Professor Emeritus, Yale University“After years of careful observation, consultation with tribal representatives of the descendant communities, and a process of painstaking documentation, Anna Sofaer and the Solstice Project have reached yet another important milestone with the publication of Chaco Astronomy.”— Brian D. Vallo, Acoma Pueblo, Founding Director, Sky City Cultural Center and Haaku Museum“Here, gathered for the first time in one accessible volume, is the research on the famous Anasazi ‘Sun Dagger’ and other astronomical evidence from Chaco Canyon. Anna Sofaer’s exciting, painstaking and controversial work remains essential for anyone fascinated by the skywatching traditions of the Southwest.”— Evan Haddingham, author, Early Man and the Cosmos and Producer PBS Nova“Anna Sofaer’s pioneering work on Chaco Canyon, a World Heritage Site, should be required reading for anyone interested in how the prehistoric people of the American Southwest conceptualized their universe and placed themselves within that universe.”-Todd W. Bostwick , co-editor Viewing the Sky Through Past and Present Cultures: Proceedings of the Eighth Oxford International Conference on Archaeoastronomy“The Solstice Project and Anna Sofaer give us a new view of Chaco Canyon and ancient North America correcting long- standing prejudices: the colonial insistence of savages on a continent that was, in fact, teeming with cities and civilizations. America before 1492 was a complicated, cosmopolitan, interesting place. Sometimes it takes a jolt or shock to open our eyes to reality, and the Solstice Project has been high amperage.”-Stephen Lekson editor, The Architecture of Chaco Canyon, New Mexico