Dear Friend,
On this day of winter solstice, with the turn of the sun to lighter days, we offer our heartfelt gratitude for your continuing support of the Solstice Project. This past year has brought several rewards: new protective action for Chaco’s fragile sites, and a host of new insights into the extraordinary expanse and ritual monumentality of Chaco architecture and roads. New technologies allow us to now envision the Chacoans’ centuries of planned cosmological roads and buildings, a pattern often related to celestial cycles and sacred landscape. We are excited that our new film will use these tools to draw out the complex legacy of the Chaco culture.

Educational Outreach:
The power of the Chacoans’ connections with the cosmos continues to captivate the public. At summer solstice our film The Mystery of Chaco Canyon was rebroadcast by KNME; and at the fall equinox the National Geographic Channel featured Chaco and Anna Sofaer in a program Chasing the Equinox. This program showed Chaco’s astronomical alignments in the context of the equinox celebrations of ancient cultures across the world: Angkor Wat, Malta, and Chichen Itza among others. The equinox alignments of Pueblo Bonito were shown in conjunction with the equinox light markings on Fajada Butte. National Geographic captured the striking contrast: a minute light marking bisects a small double spiral carved near the top of the butte on equinox day near solar noon and hours later on the canyon floor Bonito’s massive walls align to the sun setting at this key middle position of its seasonal cycle.

Further affirming the public’s appreciation of the Chaco culture, since its release in 2000, our film, The Mystery of Chaco Canyon has aired more than 10,000 times on 95% of the nation’s PBS stations; and it has been broadcast 91 times on New Mexico PBS.

This past week, on Dec 12th, we presented Pueblo Bonito: Heart of the Chaco World at the New Mexico Museum of Natural History and Science. We have chosen Pueblo Bonito as the central focus of our new film for PBS, and this was a preview highlighting Pueblo Bonito’s beauty, unique shape, and vast contents of precious objects. The film will draw the audience into virtual experiences of its monumentality and ritual spaces: more than 800 rooms and 36 kivas. The building’s dynamic life across 300 years will astound viewers in the constant construction and deconstruction of kivas, creation and destruction of ritual objects, and purging of rooms and objects with fire.  Symbolic objects of Mesoamerican origin, including scarlet macaws and cacao, and abundant offerings in elite burials will convey Pueblo Bonito’s intense ritual practice that parallels sites throughout Mesoamerica.

But never has anyone tried to capture Pueblo Bonito’s full grandiosity and geometric complexity until now. Our partner Rich Friedman, with his trenchant archaeological knowledge, combined with skills of precise mapping and 3-D modeling is creating animations of Bonito in exquisite detail. These animations will be the backbone of our new film, demonstrating what we could only imagine before. To sense the magnitude of Bonito’s development, Click on the image below.

At our talk last week, the New Mexico Museum of Natural History and Science welcomed the audience to interact with the Sun Dagger Explorer, a computer-generated model created and installed by the Solstice Project. To produce this exhibit of Chaco’s celestial calendar site, created about 1000 years ago by the Ancestral Pueblo people, we used innovative technologies of close range laser scanning to precisely reproduce its recordings of the solar and lunar cycles and its shadow casting rock slabs. The exhibit engages visitors to use interactive tools, as though they were present at the site, to explore the site’s rock edges that cast shadows and to facilitate light markings on the spiral rock carvings.

In a broader exploration of the Chaco culture’s geographic expanse, last January, the School of Advanced Research sponsored our talk Chacoan Astronomy, Cosmology, Roads and Ritual Power: Insight into the Chaco World Using New Technologies. You can see a recording here.

Research: Chaco Roads Study Renewed We are excited that Robert Weiner, Solstice Project Research Associate, is undertaking a large-scale study of Chaco roads for his PhD research at the University of Colorado Boulder.  As we first learned with our study of the Great North Road, these enigmatic features suggest symbolic connections: relating Chaco’s ritual Great Houses with special land forms such as buttes, caves, springs, and sometimes with astronomical directions.  The Chacoans’ effort to create hundreds of 30-foot wide roads throughout the Four Corners region marks an astounding labor investment, and yet we know little about their extent. They are fragile and at risk of fast disappearing from the impacts of natural erosion and oil and gas activity. Rob’s study could not be more timely.

Rob will combine new fieldwork with LIDAR analysis and cross-cultural comparisons to shed light on what inspired the Chacoans to sculpt these monumental avenues. He is excited to be collaborating with leading experts on Chaco roads including Rich Friedman, John Stein, John Roney, and Fred Nials in planning and conducting fieldwork.  Rob’s study will support further analysis of LIDAR data in search of Chaco roads, following the lead of the Solstice Project’s 2010 LIDAR study of the Great North Road. This past summer, Rob and Rich Friedman visited 52 roads-related sites and outliers across New Mexico, Arizona, Utah, and Colorado with a permit from the Navajo Nation. They will continue roads fieldwork in the summer of 2020. The team will, for the first time, test optically-stimulated luminescence (OSL) dating, which measures the last time soil deposits were exposed to sunlight, to date Chaco road constructions.
This renewed research of Chaco roads, revealing more of their vast extent and symbolic connections, will raise awareness of the great value of this heritage of the American Southwest, supporting their protection.

Chaco Protection:
We were pleased that a moratorium on new oil and gas development was declared by the Secretary of the Interior this last May, within a ten-mile zone around the Chaco Culture National Historical Park boundary. But now this year-long moratorium will expire in about six months. Legislation for protection continues in Congress; the Chaco Cultural Heritage Area Protection Act of 2019 was passed in the House, but awaits action in the Senate; and further action to prevent damage to the greater Chaco landscape with outlying constructions and many Chacoan roads will be needed. We greatly appreciate that the New Mexico Congressional delegation, with support of Pueblo leadership and Paul Reed of Archaeology Southwest, continue to effectively back these efforts for Chaco’s protection. We will alert you on our web site and Facebook page on actions you can take at key times.

We were honored by an introduction to our talk last week by Paul Pino, chairman of the Laguna Pueblo’s Tribal Historic Preservation Office. He underscored the continuity of his culture with Chaco “I like archeologists because they validate the things that have been told to us by our ancestors…The reason the pueblos are still so much into their culture is because we’ve safeguarded that culture for centuries. It’s a heritage that was left to us by the people that lived in Chaco.”

We appreciate your continuing support of the Solstice Project with tax-deductible gifts to our ongoing efforts. For further information, and to keep up with our ongoing work, see our website solsticeproject.org

All best wishes for a joyous holiday season and good New Year, 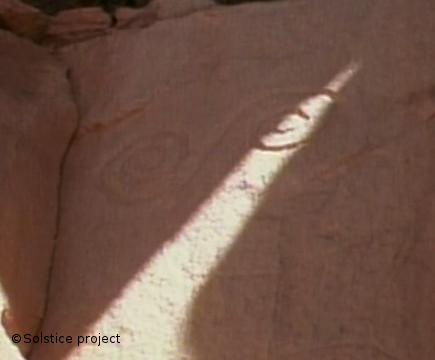 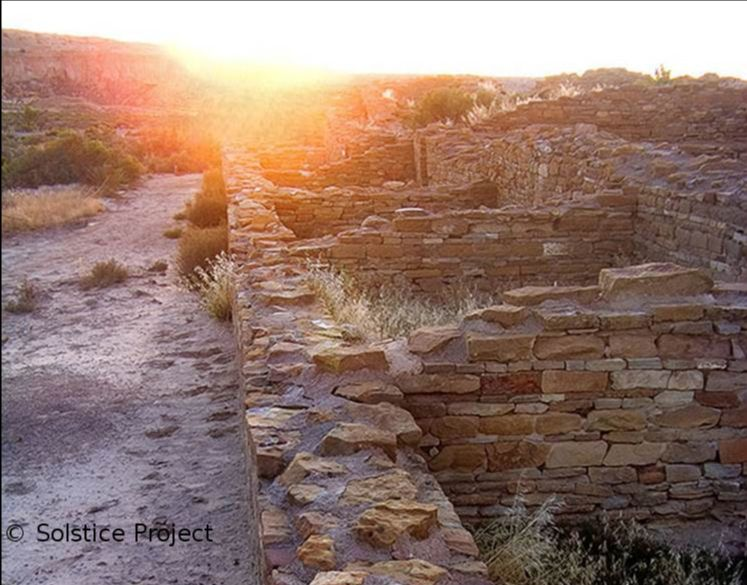 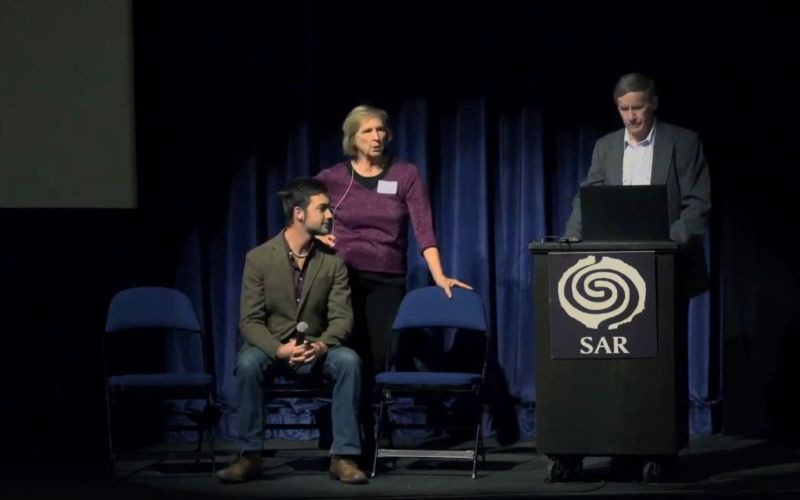 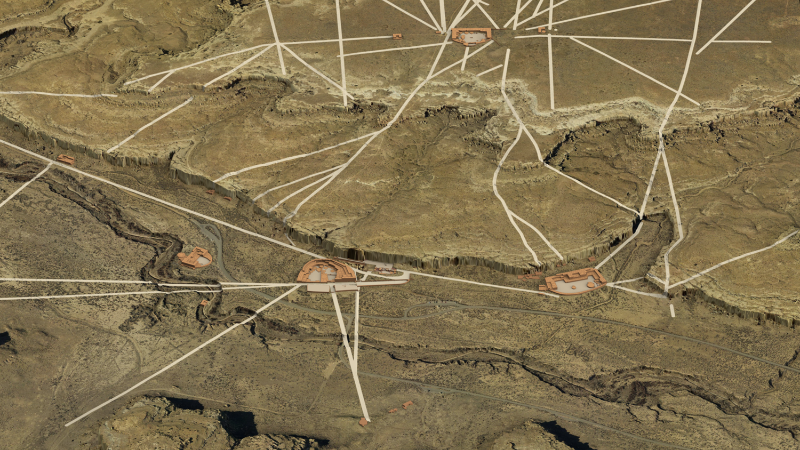