Dear Friend,
We are excited to share with you our new, short video about the fascinating Chaco world and its remarkable expanse, from Chaco Canyon to Chimney Rock to Bears Ears: “A Sacred Linescape Unites the Four Corners.”

Reflecting on the Solstice Project’s goals and values this new year, I ask what has inspired our constant engagement over four decades, and continues to do so? And what is our work to be now?

Your help has been critical to our work. Talented people of many disciplines—from astronomy to archaeology and geodesy—have helped us to conduct numerous in-depth studies with innovative technologies, create two PBS films, and produce twelve research papers and a book. What is the big deal in Chaco—are we being pulled by the same magnetism that inspired the ancients?

For me, the pull is learning about a world of brilliantly conceptualized space and time. The Chacoans created intricate geometric patterns and astronomical alignments, engineered hundreds of roads, built 150 Great House ritual buildings—iconic architecture—across distances of 200–300 miles; all repeating patterns of the Great Houses and roads in the central complex of Chaco Canyon.

We are neighbors in New Mexico to a great culture of the ancient world. But the remoteness of its sites—spread across the pinnacles, mesas, and canyons of the Four Corners—has veiled its accomplishments. Chacoan roads, which we now understand to be spiritual pathways, are subtle and fragile. However, this ancient world will come alive in film, in new remote sensing technologies, and in 3-D modeling. And only if it is alive to people will they support its protection against today’s ravaging impacts—of energy extraction, off-road vehicle activity, and natural erosion. We hope you can support us in continuing this vital work:

Our third film for PBS will draw from the stunning aerial imagery of Adriel Heisey and use 3-D modeling and animation to reveal the furthest reaches of the Chacoans’ ritual architecture. It will show how the central canyon’s ceremonial life, tied to the cycles of the sun and moon, gave order and power to this vast expanse. We will convey how vibrant rituals entranced people with exotic Mesoamerican objects—sounding conch shells, stimulating cacao beverages, and live scarlet macaws—and possibly with gambling.

The film will examine, along with the Chacoans’ powerful expanse, their deliberate closure and departure from the canyon, 800 years ago, as a “conscious choice to devolve.” In these words, the late Alfonso Ortiz of Ohkay Owingeh Pueblo suggested that with this closure the Pueblo people committed themselves to never repeat the Chacoan exploitation of power and extreme wealth. Petuuche Gilbert of Acoma Pueblo refers to their decision as “… realizing that the human mind can be powerful enough to deduce from nature not only what it takes to survive, but also the ability to misuse these powers in relation to each other as humans.” After Chaco, he says the Pueblo people sought to “get back in equilibrium and harmony with the natural ways of life.” This profound decision offers wisdom for our times. 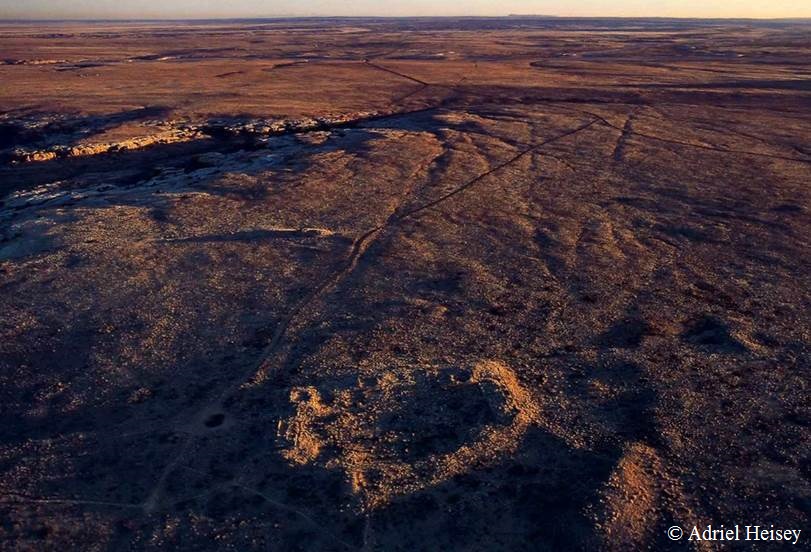 Protecting Chaco: The Chacoans’ road alignments to prominent land forms and their astronomical connections to distant sites create a web. The landscape, as a whole, held enormous value. But for many people engaged today in energy industries it appears to be a barren wasteland available for mineral profits. Increasing oil and gas lease sales encroach on the region without citizen consultation and archaeological evaluation. Nearby Diné communities are experiencing immediate health impacts with degradation to their water, air, and land base. The ancient lands of Utah are now especially at risk. Feds Hold Biggest Utah Oil and Gas Auction in Years.

We are pursuing protection of Chaco Great Houses and their web of “roads” with LiDAR and photogrammetry—remote sensing technologies—to alert the public to this precious and fragile “linescape.” This data will prevent unconstrained invasion of the landscape and, where necessary, enable land users to avoid damage to roads and sites. The study will create an invaluable record for future generations to appreciate that the Chacoans invested enormous planning and labor in the construction of hundreds of roads—work nearly equal to their investment in Great Houses. Our LiDAR (aerial laser) recording of the Great North Road achieved remarkable precision in revealing extremely subtle roads.

See in this link how the changing light direction in the LiDAR derived image illuminates numerous roads emanating from Pueblo Alto—many that are not visible by other means.

Imagine that most of the Chaco Great Houses have multiple roads. Our goal is to one day complete this analysis for the entire Chaco region, showing the landscape complexes of the 150 Chacoan Great Houses located across the Four Corners. This research is being led by Solstice Project colleagues, GIS expert Richard Friedman and University of Colorado Boulder PhD student Rob Weiner.

You can also help protect Chaco by supporting our proposal for a 20-mile Buffer Zone around Chaco Canyon. For more information, including about the Udall-Heinrich ‘Chaco Cultural Heritage Area Protection Act of 2018,’ click here!

This year we will release our second book, The Chaco World: Written on the Landscape, bringing together our four most recent peer-reviewed papers, showing the topographic trajectory of Chaco Canyon to the moon; the effectiveness of LiDAR; and the Chacoans’ relationships with Mesoamerica as well as their expanse into the wider Southwest. We are excited that the book will also extend this worldview beyond the Americas, comparing Chaco to Ancient Near Eastern temples with Weiner’s work, and bringing in colleagues Jacqueline Newell and Andrew Sinnes as we explore parallel expressions at Cahokia, Hopewell, and Stonehenge.

At the start of the year, the School of Advanced Research in Santa Fe will be hosting our talk: “Anna Sofaer, Richard Friedman, and Robert Weiner, present Chacoan Astronomy, Cosmography, Roads, and Ritual Power: Insights into the Chaco World Using New Technologies, Thursday, January 24, 2018, from 6:30–7:30 PM at the James A. Little Theater, Santa Fe. For more information see: sarweb.org/public-lectures/

This winter solstice, we have a striking convergence of sun and moon—on December 21, the winter solstice sun sets at 4:54 PM (Mountain Time) as the full moon appears on the opposite horizon at 4:18 PM. Enjoy the coming light!

Please note that your contributions to our non-profit 501-c-3 Solstice Project are tax deductible.

Anna Sofaer and the Solstice Project